“We are so blessed to have connected with TGen and the array of research and clinical partners they have assembled to mount a decisive attack on this dreaded disease, which all too early took the life of my loving husband at the age of only 56,” said Natalie Sabga, the widow of John E. Sabga.

A businessman and restaurateur, John Sabga succumbed to this most aggressive of cancers in January, following a valiant and hard fought 10-month battle with pancreatic cancer, the third leading cause of cancer related death.

“We, his family, friends and colleagues, choose to honor his memory and bravery by forging forward on a relentless journey to help in the global fight, by raising funds for a specific research study that will aid in finding answers to eradicate this devastating disease,” Natalie Sabga said.

Today’s kick-off of the $1 million drive will take place in Port of Spain, the capitol of Trinidad and Tobago, a two-island nation in the southern Caribbean just off the coast of Venezuela at the northern tip of South America.

Natalie Sabga connected with TGen this summer in Boston at the Seena Magowitz Golf Classic, an annual fundraising event for TGen hosted by the Seena Magowitz Foundation and supported in large measure by national bedding and home furnishing industries. 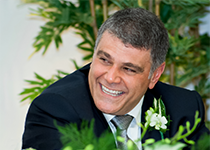 “We, his family, friends and colleagues, choose to honor his memory and bravery by forging forward on a relentless journey to help in the global fight, by raising funds for a specific research study that will aid in finding answers to eradicate this devastating disease.”

“We are so grateful to Natalie Sabga and the Sabga Foundation for their leadership in bringing new, more effective treatments to patients who are fighting pancreatic cancer,” said TGen Foundation President Michael Bassoff, who will participate in today’s announcement ceremonies, as well as meetings with Trinidad and Tobago President Anthony Carmona and the Honorable Terrence Deyalsingh, the island nation’s Minister of Health.

“As visionary philanthropic leaders, Natalie Sabga and Roger Magowitz are bringing hope and answers to hundreds of thousands of patients worldwide,” Bassoff said. “As Natalie puts it so well, ‘Our World, Our Fight.’ ”

TGen led a major international clinical trial that resulted in 2013 in FDA approval of nab-paclitaxel in combination with gemcitabine as the nation's standard of care for late stage pancreatic cancer. Subsequent and ongoing TGen-designed clinical trials are leading to more patients surviving years longer.

About TGen
Translational Genomics Research Institute (TGen) is a Phoenix, Arizona-based non-profit organization dedicated to conducting groundbreaking research with life changing results. TGen is focused on helping patients with neurological disorders, cancer, diabetes, and infectious diseases, through cutting edge translational research (the process of rapidly moving research towards patient benefit).  TGen physicians and scientists work to unravel the genetic components of both common and rare complex diseases in adults and children. Working with collaborators in the scientific and medical communities literally worldwide, TGen makes a substantial contribution to help our patients through efficiency and effectiveness of the translational process. TGen is affiliated with City of Hope, a world-renowned independent research and cancer and diabetes treatment center: www.cityofhope.org. This precision medicine affiliation enables both institutes to complement each other in research and patient care, with City of Hope providing a significant clinical setting to advance scientific discoveries made by TGen. For more information, visit: www.tgen.org. Follow TGen on Facebook, LinkedIn and Twitter @TGen.
Media Contact:
Steve Yozwiak
TGen Senior Science Writer
602-343-8704
[email protected]